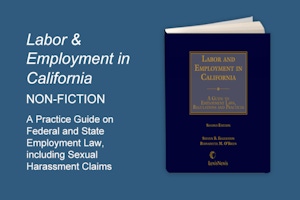 Here is the backstory of how the book came about:

Turn back the pages to the late 1980s. My legal career is on fire and I’m quickly becoming a force to be reckoned with at the trial bar. Noted trial attorney Al Wohl and I had broken off from Wohl, Cinnamon & Hagedorn to form our own law practice, Wohl & Eggleston. My wife, Bernadette M. O’Brien, was an associate attorney with us and her father, the inimitable David O’Brien, was a retired UI and Worker’s Comp Appeals Judge who spent his time writing books and lecturing throughout the state.

Butterfield Publishing approached the Judge to write a comprehensive practice book on California labor and employment law, at both the federal and state level. The Judge declined the offer, saying he was too busy, but suggested, “my son-in-law and my daughter, who both graduated first in their class in law school. Steve is making his name as a trial lawyer in business and employment law, and my daughter has been working in my office since she could crawl. Why don’t you ask them to write the book?”

Nine months later in 1991 we published Labor and Employment in California: A Comprehensive Practice Book on Federal and State Employment Law under the Butterworth banner. The book hit the shelves and sold well, Butterworth was bought by Lexis Nexus, and ever year thereafter the book was updated by the biggest legal publisher in the world backing us. Following the release of the book, I remember doing a ton of seminars with Judge O’Brien, who would swear up and down to seeing Leprechauns as a child. It was a hoot but there’s one thing I’ll never forget.

Years after his daughter and I divorced – she was seeing another attorney behind my back, a lawyer I didn’t like by the name of Zack Smith – the Judge stopped me in the lobby in my San Francisco office. We had hired him as an expert in a case against Home Depot for disability discrimination. As the Judge and I waited for the elevator to arrive, he turned to me and said to my utter surprise and consolation: “Steve, you always were my favorite son-in-law.” I smiled and replied, “thanks, David, that means a lot coming from a guy with five daughters.”

Coauthor of the Proposed New 28th Amendment to the U.S. Constitution

In 1787 things were in a shambles in America. The Confederacy of 13 states were working at odds and to fix things, held a convention whose sole purpose was to amend the Articles of Confederation which loosely bound them. Instead, the purpose was tossed aside and a whole new Constitution written and passed – a document designed “to form a more perfect union.” Few people realise how close we were to having no Constitution at all.

Grateful to have a new Constitution, those who also wanted a Bill of Rights incorporated into the Constitution, or passed simultaneously therewith, momentarily fell quiet. Better something than nothing was the feeling. But two years later, in 1789, worry of growing nationalism gripped the founders. They feared the new America might grow into another Great Britain or worse, taking away the regional sovereignty of the states and individual liberties.

From this fear, the Bill of Rights was borne. These are the first 10 amendments to the Constitution that every schoolboy and schoolgirl once knew by heart. These are the Amendments that safeguard liberty, justice, individual and state’s rights, things like freedom of press and assembly, the right to bear arms and to a jury trial, the prohibition on cruel and unusual punishment, substantive and procedural due process, and liberty.

Since those early days, 17 additional amendments have been adopted, making a total of 27. Some of these are more technical, addressing the machinery of democracy and how the parts are to function together, while others address specific rights or prohibitions. The 11th Amendment, for example, prohibits individuals from suing states in federal courts; the 16th Amendment removed constraints on the power of Congress to lay and collect income taxes; the 18th Amendment imposed prohibition, and the 21st Amendment repealed the 18th. America would not continence a nation of teetotallers.

So how does this relate to me and the 28th Amendment (Proposed)? We begin with The Food Mafia. The core theme to the book is the corruption of the American food industry by special interests. That corruption is made possible by special interests financing the elections of career politicians. If Big Food and Big Sugar had not employed the most powerful team of highly-financed lobbyists imaginable, many of them former Congressmen, we would not have 150 million pre-diabetic, Diabetic and obese people suffering in America today.

So my writing partner, Jon Gordon, said: “enough is enough.” Not only did we write The Food Mafia to make this point, he founded an IRS 502(c)(4) non-profit called Constitutional Change Now (CCN), whose purpose is to hold the first Constitutional Convention since the nation was founded, and at that Convention, pass the 28th Amendment, which he called upon me to co-write. The 28th Amendment imposes term limits on Congress, placing on them a cap of right years, and bars Congressmen from serving as lobbyists for eight years.

Read more, including the text of the 28th Amendment, and join the CCN movement at ConstitutionalChangeNow.org. All donations to the cause are greatly appreciated.