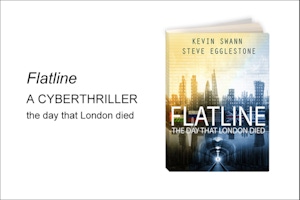 Sometimes it’s lucky to be an American. As you know, if you’ve perused this website, I’ve been fortunate to meet dozens of clients via my Upwork profile, and one of them was the amazing Kevin Swann. Kevin is a cybersecurity expert who has consulted far and wide, including stints with the British secret service, MI6. He read my legal/detective thriller “Conflicted” and the great reviews, but that’s not what sold him. Other co-writers have great books with great reviews.

What sold Kevin is that the fiction cyber-thriller he wanted told involved two brothers, one British and one American. Thus he felt he needed a ghost or co-writer savvy with Americans. On top of that, my background helped. First, my diverse past came to aid, as I was not just a former law school Valedictorian and professor, but also a former adjunct professor in American History, Politics, and Ethics at the college level, the son of an F100 Jet Fighter and B52 Bomber pilot, and had recently founded Drones for Humanity. Yes, I was an American lawyer with an interest in cyber and technology.

The result was “Flatline, a Cyber-thriller…the day that London died.”