“Lift Up Your Head,” by Paul Crow | with Steve Eggleston – An Inspirational Memoir (2018) 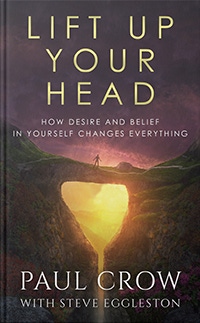 When we first spoke, Paul already had the title for the book he wanted to write. The title, “Life Up Your Head,” captured eloquently his mighty conquest, rising to the top of the British IT world after being born into the Burngreave ghetto. But though he came armed with the title, his story was otherwise undeveloped and untold and he was not a writer, as he had not graduated from senior school. The story was in his memory organically, but he had never expressed it before.

So we made our deal and set out on the adventure of co-writing a book, video-conferencing every Wednesday after he finished work in London, and over the occasional weekend afternoon or evening. Six months later we had what in America would be called a Horatio Alger’s story, a “rags to riches” tale, except this one truly had a Dickensesque flavor. Yet Paul was determined to push his story further, to inspire not just poor kids like him, but communities and cities and even nations and all of mankind to lift up their heads and shoot for the stars…because “if you don’t reach the stars, you’ll land on the moon…and that will be alright.”

We choose two covers for his book, one for more stodgy commercial audiences who might want to see the face of the speaker before them on the cover, and the other for the general marketplace, more abstract and inspiring to the curious eye. In today’s digital, print-on-demand world, both were entirely possible and proper. The pressure was on with Paul’s book, because he was thinking of leaving IT to promote the book and take his message on tour throughout England after taking Andy Harrington’s public speaking courses…and from there as far as it would take him. But his IT skills were so in demand, that he’s now decided to do both.

And if I get my way, if my influence makes a difference, Mr. Paul Crow will do many things in tandem: tour on his book and the message, “lift up your head,” run for political office locally in Sheffield, work closely with his local community and the nation at large to help children like him rise out of poverty…and one day earn the distinction of being knighted. And why not? If you shoot for the stars…